The Big Data Climate Challenge, hosted by Global Pulse in support of the Secretary-General’s 2014 Climate Summit, received submissions from 40 different countries at the close of the Call for Submissions last week.

This global and multidisciplinary response demonstrates how momentum is building ahead of the UN Climate Summit in September, where the Secretary-General will convene world leaders from government, finance, business and civil society to catalyze climate action. The Big Data Climate Challenge is aligned closely with the goals of the Summit, seeking to unearth data-driven climate solutions and evidence of the economic dimensions of climate change. 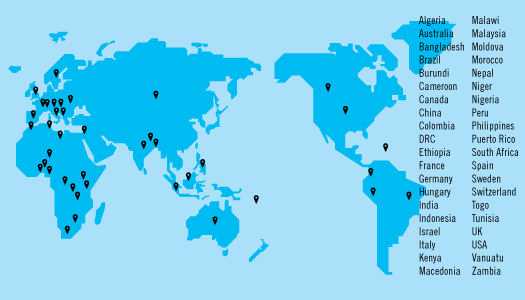 Above: map illustrating countries from which projects were submitted

As a result of the global response, the Big Data Climate Challenge has drawn the interest of number of international media outlets including a feature in Fortune (US) about how researchers use big data to model the environmental effects of climate change. Spanish edition El Huffington Post published an opinion piece by Global Pulse's Chief of Research Miguel Luengo-Oroz titled “When Big Data Met Climate Change.” The Challenge was also featured in Information Week (US), IT News Africa (Africa), Engineering News (New Zealand), and in several blogs and print media across India, South Africa and Brazil as an example of the intersection of big data and climate.

Global Pulse's Chief of Research Miguel Luengo-Oroz commented on the response to the Challenge, “The energy behind big data for climate change action is clear. Submissions were received from every sector—academia, civil society, business, NGOs, and governments all participated in the first Big Data Climate Challenge. We expect a challenging and exciting evaluation process.”

The next phase in the Big Data Climate Challenge is to determine the top project submissions. The Advisory Board and Technical Committee will evaluate projects through July. Winners will be announced in August, and then showcased at the Secretary-General’s Climate Summit in September. Subsequent output will likely include a landscape of the field of climate change through big data, mapping the intersection of these fields to share best practices, encourage knowledge sharing and establish a hub of key stakeholders to accelerate big data innovation for climate action.