7 min read
Share on facebook
Share on twitter
Share on linkedin
Share on email
Photo: AP
This guest blogpost is a follow up to the Asia Urban Futures Workshop, recently hosted in Bangkok by Pulse Lab Jakarta in partnership with UNDP Global Centre for Public Service Excellence, UNDP Asia-Pacific Regional Centre, Bangkok USAID Asia and UN-Habitat Bangkok Office. The Workshop aimed at exploring the future of cities in Asia, and the blogpost is a summary of a memo that was prepared by the author to help foster discussion around the interaction of Big Data, resilience and urban areas in developing and emerging regions. This post is authored by Dr. Simone Sala, Associate Director of the Sensemaking Fellowship at Swansea University Network Science Research Center and President of Habitat Seven Europe. The full document is available here.
Background: cities and resilience

Cities are becoming increasingly central in resilience-building initiatives across developing and emerging regions. On one hand, there is a clear demographic reason for such trend: since 2005 more than half of the world's population resides in cities. Indeed, in Africa the urban population will double in less than a decade. Latin America and Caribbean population growth is less pronounced in urban areas, but in this region urban dwellers already represent the 75% of the total population. In Asia that figure currently accounts for 42.5% of total population – and there will be 3.3 billion people living in urban areas by 2050 (1).

On the other hand, cities do represent socio-technical ecosystems with a comparative advantage for the application of the most advanced technologies such as the development of data -driven services. Unlike rural areas, for example, information infrastructures are often available, data production and collection is cheaper, and the demand for value-added information services among city stakeholders is high. A mix of intentional and non-intentional production and dissemination of data and information makes both public and private organizations able to respond to such demand for their own benefit (e.g. increased efficiency and profit, respectively). These organizations find in cities a critical mass of users and assets that makes developing applications and services feasible and cost-effective.
It is thus not surprising that Global Development players are increasingly looking at cities as privileged eco-human systems where deploying resilience-building/strengthening initiatives through advanced data-driven technologies, in order to maximize and optimize their efforts aimed at global wellbeing and international stability. The concept of resilience, defined as “the ability of a substance or object to spring back into shape,” is actually not new in the Global Development arena, nevertheless cities are more and more becoming associated with it. The concept started to gain popularity following up the emergence of climate change challenges, as well as global crises such as the 2008 food, fuel, and financial crises. Andrew Zolli, PopTech Executive Director, explained in the New York Times as a new idea – i.e. “how to help vulnerable people, organizations and systems persist, perhaps even thrive, amid unforeseeable disruptions.” Some authors have also been trying to advance the ‘resilience paradigm’ by questioning its essence, such as Nassim Taleb  who talked about antifragility that “is beyond resilience or robustness. The resilient resists shocks and stays the same; the antifragile gets better.”
Among global development organizations trying to tackle resilience through big data two main should be highlighted: the United Nations’ Global Pulse, and initiatives by the Rockefeller Foundation & PopTech. The former (which blog readers should be particularly aware of!) consists of a network of innovation labs where research on Big Data for Development is conceived and coordinated, in partnership with experts from the United Nations, governments, academia, and the private sector. The latter hosted a workshop which led to the development of a milestone in the field – i.e. a white report highlighting opportunities and threats in the application of Big Data for community resilience (2), and a set of seven principles for Big Data and Resilience:
Resilience-building in cities via big data
The memo I prepared for the global development practitioners meeting in Bangkok at the Asia Urban Futures Workshop aimed at providing a bird-eye view on the main elements composing the intersection of resilience, big data, and cities. For this reason, the document focused on the way big data are being used to build or strengthen resilience in cities worldwide – starting with defining what makes cities intelligent.
According to Allwinkle and Cruickshank (2011) (4) smart or wired cities are those cities “when investments in human and social capital and traditional (transport) and modern (ICT) communication infrastructure fuel sustainable economic growth and a high quality of life, with a wise management of natural resources, through participatory governance.” Communication is also highlighted by a report from Ceres and partners (5) as one of the four cornerstones to plan and implement a resilience strategy in urban area, since resilience initiatives tackle challenges that are not perceived daily by city dwellers, and thus need to be informed to become proactive actors of resilience-building. Other researchers further defined different levels of smartness in a city, based on the integration level among different stakeholders living in an urban environment (de Oliviera Fernandes et al., 2011). At the same time, Batty (2014) (6) interestingly pointed out that “the very definition of a system as a set of interacting parts contains within it the seeds of its own destruction” and conceptualized the four cornerstones of a ‘resilience zone’ strategy. 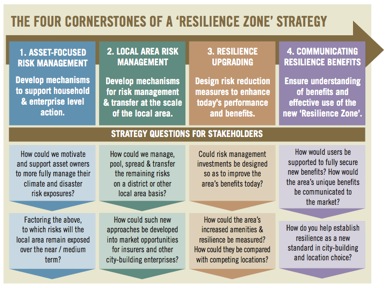 Four cornerstontes of a ‘resilience zone’ strategy (Batty, 2014) (6)
According to IBM (2009) (7) cities are based on six core systems that should be considered both individually and holistically: (a) people; (b) business; (c) transport; (d) communication; (e) water; and energy.  Such systems, and comprehensive urban systems as a whole, present a variety of issues across different temporal/spatial scales, and with different related metrics (see the following table from Bettencourt (8), 2013). 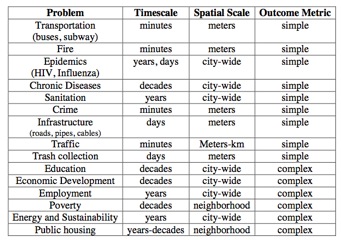 City issues across spatial and temporal scales and their outcome metric (8)
Caveats
The memo also focused on possible drawbacks, synthetizing some of the most common concerns around the substantial risks of inappropriate constructions of smart cities and the human societies living in them. Interested readers to this topics should also look at the studies developed by Heffernan (2011) (9) and Scharmer & Kaufer (2013) (10).
Placing algorithms at the forefront (or even in the front-row seat) of decision-making may have potentially severe drawbacks. It’s indeed us who program algorithms, and we are exposed to a variety mistakes while programming. Moreover, basing algorithms on historical data – i.e. the world as it was (or it is, according to currently available data) – makes algorithms predict the future as very similar to the past, which can be bad for many reasons.
Building and/or strengthening resilience in urban systems is a comprehensive eco-socio-technical issue shaped by politics and policies, rather than a mere technical challenge. When trying to make cities disaster-proof, it is also tricky to define what a disaster is – since many small events (e.g. death for malnutrition or untreated disease) that have huge figures if cumulated tend not to be included in common resilience-oriented initiatives.
Finally, just like digital divide characterized the first age of the Information Society, a divide does and will exist in the capacity to gather and analyze data for informed decision-making. This is something all organizations working in the global development field should seriously take into account.
Conclusion
The document is definitely a draft sketch linking urban areas, resilience, and (big) data in developing and emerging regions. In such nexus new questions arise daily, and the number of unanswered ones outweigh that of the questions we have been able to providing meaningful answers so far.
Data-driven analytics seem to incarnate the possibility of providing timely and theoretically unbiased look to citizens’ behaviors, thus providing institutions with a privileged advantage to provide them meaningful feedbacks. Nevertheless, this is a brand new territory, to which we are not able to draw definite boundaries: quite possibly, we would need to invent new maps to chart these challenges and opportunities.
We very much welcome any of your inputs and remarks to improve the study, and would love to hear about existing case studies and examples of cities that tackled their challenges through data-driven technologies. The study already provides some interesting examples of initiatives being currently implemented in cities worldwide that are trying to tackle energy, climate change and natural resources issues through data-driven technologies. We definitely (equally) welcome any open questions and dystopian threats that big data may present to the city dwellers of 21st century and beyond.
Please feel free to contribute to the piece by emailing me: salas@mit.edu.
Footnotes
(1) For updated statistics see the Population Division of the Department of Economic and Social Affairs of the United Nations http://esa.un.org/unpd/wup/
(2) See “Big Data, Communities and Ethical Resilience: A Framework for Action” here: http://poptech.org/system/uploaded_files/66/original/BellagioFramework.pdf
(3) Adapted from the blog of Dr. Patrick Meier, one of the Rockefeller/Pop Tech fellows http://irevolution.net/2013/09/23/principles-for-big-data-and-resilience/
(4) Allwinkle S., Cruickshank P. (2011): Creating Smarter Cities: An Overview. “Journal of Urban Technology”, Vol. 18, No. 2, pp. 1-16.
(5) Ceres, The Next Practice Ltd., and The University of Cambridge Programme for Sustainability Leadership, 2013. “Building resilient cities – From Risk Assessment to Redevelopment”.
(6) Michael Batty, 2014. “Smart Cities & Big Data – How We Can Make Cities More Resilient”. The Israel Pollak Distinguished Lecture series, March 2 2014, London.
(7) IBM, 2009. Smarter Cities.
(8) Luis M. A. Bettencourt, 2013. “The Uses of Big Data in Cities,” working paper, Santa Fe Institute.
(9) Margaret Heffernan, 2011. Willful Blindness: Why We Ignore the Obvious at Our Peril. Walker.
(10) Otto Scharmer, Katrin Kaufer. 2013. Leading from the Emerging Future: From Ego-System to Eco-System Economies