Conserving forests and other ecosystems is one of the 17 Global Goals that make up the UN’s 2030 Agenda for Sustainable Development. As the climate negotiations (COP21) in Paris came to a successful conclusion, countries around the world agreed on the importance of taking action to deal with the impacts of climate change. To show how big data can assist in this effort, Pulse Lab Kampala is pleased to pilot a new tool that enables policy makers to make better informed decisions on how to protect the biodiversity in their countries.

Imagine you are a policymaker who has to make sure that the biodiversity in your country is preserved. Which areas need to be protected? Which areas border mining sites? How big are the wetlands? Are animals moving through corridors of protected areas, or do they tend to migrate to other areas? Where would you start to gather the information you need to make these decisions?

Representing and analyzing spatial data can be crucial to inform the formulation of policies to protect ecosystems, such as rainforests, mangroves, coral reefs, wetlands, drylands and grasslands. While satellite imagery is currently available online through various sources, it is not always easily accessible or intuitive to utilize.

To help address this challenge, Pulse Lab Kampala has designed a web-based tool that displays spatial data in a user-friendly interface that allows users to compare a number of sources of geographical data, and generate statistical summaries of important factors of interest.

Pulse Lab Kampala worked in collaboration with the NBSAP Forum, UNDP in Zimbabwe, and the Government of Zimbabwe to design the tool specifically for combining various datasets and information needed by policymakers to formulate National Biodiversity Strategies and Action Plans (NBSAs).

To build the tool, a team of data engineers, data scientists, GIS experts and geographers collaborated to collect and combine different categories of geo-referenced data relevant for biodiversity. The data was then harmonized into a consistent format and the interface of the tool was developed. The pilot tool was tested and validated at a workshop in Zimbabwe and user feedback was incorporated.

With the online tool, policymakers in Zimbabwe can understand the landscape at a glance by seeing key information such as which areas have been deforested in the last years, which areas suffered fires, where mining operations are ongoing and where they are feasible in the future.

The screenshot below shows the protected land areas in Zimbabwe overlayed with locations of fires in 2014, highlighting where biodiversity is threatened by fires: 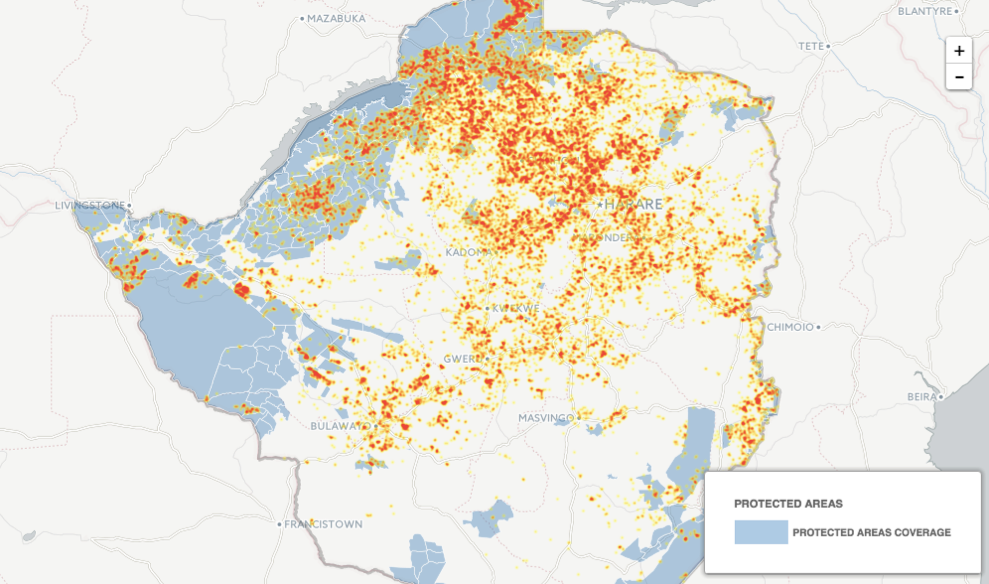 This view shows how much of the protected areas (in km2) were threatened by fires: 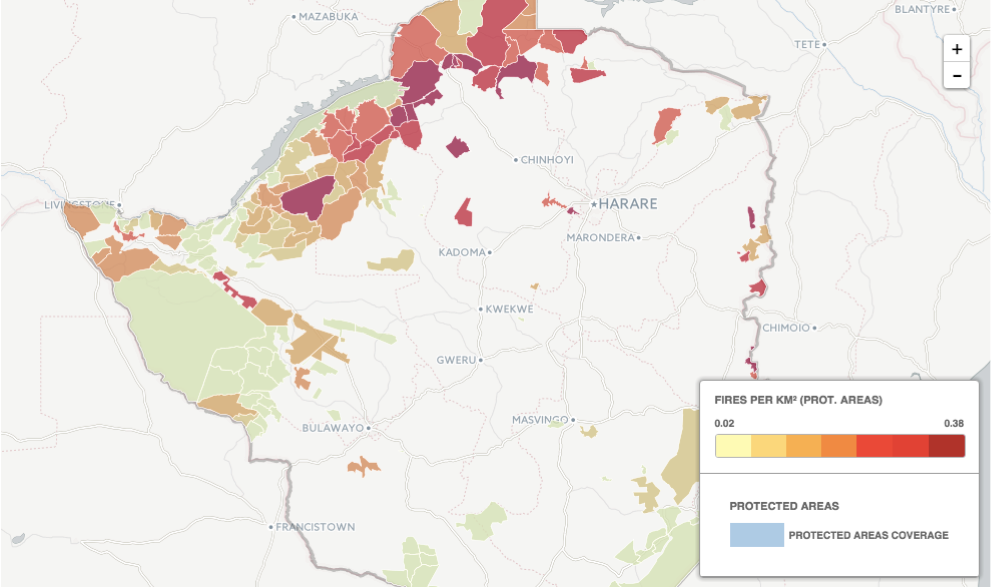 The potential uses are numerous. This version of the tool was developed as a pilot to support biodiversity policy in Zimbabwe, but can be adapted for use by other countries with further developments.

More information and details on next steps for the tool are coming soon. In the meantime, please share your comments and feedback, and get in touch if you'd like to work on expanding or iterating on the pilot.