Today Pulse Lab Jakarta launches Translator Gator, a new language game to support research initiatives in Indonesia. Players can earn phone credit by translating words between English and six common Indonesian languages. The database of keywords generated by the game will be used by researchers on topics ranging from computational social science to public policy.

Translator Gator is inspired by the need to socialise the 17 Sustainable Development Goals (SDGs), currently being integrated into the Government of Indonesia’s programme, and the need to better monitor progress against the varied indicators. Thus, Translator Gator will raise awareness of the SDGs and develop a taxonomy of keywords to inform research.

An essential element of public policy research is to pay attention to citizens’ feedback, both active and passive, for instance, citizens’ complaints to governments through official channels and on social media. To do this in a computational manner, researchers need a set of keywords, or ‘taxonomy’, by topic or government priorities for example.

But given the rich linguistic and cultural diversity in Indonesia, this poses some difficulties in that many languages and dialects are used in different provinces and islands. On social media, such variations – including jargon – make building a list of keywords more challenging as words, context and, by extension, meaning change from region to region.

Translator Gator is a people-powered language game which creates a dictionary of translations to support academic research and social projects in Indonesia. It aims to translate a set of English keywords into Indonesian, as well as other local languages such as Bahasa Jawa, Sunda, Minang, Bugis, Melayu, and even includes slang. The translated keywords will be applicable to many projects, especially those related to digital text analysis. 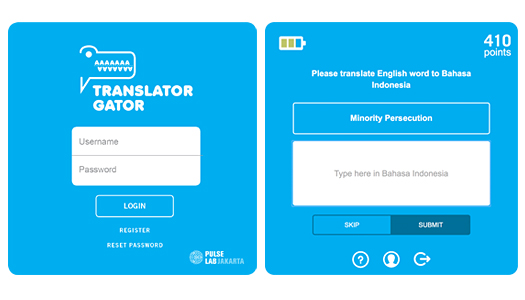 Pulse Lab Jakarta continues to explore new ways to communicate the Sustainable Development Agenda and Translator Gator plays an important part in familiarising the term ‘SDGs’ particularly among Indonesian youth. The game-based translation project is designed for linguists but open for anyone to enjoy, while at the same time learning about SDG related terms and topics.

There are four components of the game:

Throughout the game, users will collect points by playing with these four components. The points collected can then be redeemed for phone credit (pulsa).

Pulse Lab Jakarta is grateful for the generous support of the Department of Foreign Affairs and Trade of the Government of Australia.