Translator Gator: Phase I Wrap Up

UN Global Pulse recently finished the Phase I implementation of Translator Gator, a language game that builds taxonomies for research initiatives. Hundreds of people from across Indonesia engaged with the game and helped build a new language dictionary for the Sustainable Development Goals (SDGs).  Below are the lessons learned and next steps of the project.

From colloquial to academic discourse

Since January, Translator Gator has received over 109,000 user contributions from hundreds of players across Indonesia. Pulse Lab Jakarta has been inspired by the response of language enthusiasts across the archipelago.

In a previous blog post, at about halfway through the campaign, Pulse Lab Jakarta provided the breakdown of players by age and gender. Another interesting fact is that the network of users includes a large number of polyglots, who usually play Translator Gator before work or at lunchtime. Wednesday seems to be a popular day for gaming, and the most popular language is Bahasa Indonesia, followed by Bahasa Jawa and Bahasa Sunda. More insights are captured in the graphs below.

An initial analysis of the Bahasa Indonesia taxonomy suggests that the crowdsourced translations are over 97 percent accurate, confirming the ‘wisdom of the crowd’ when it comes to developing taxonomies. 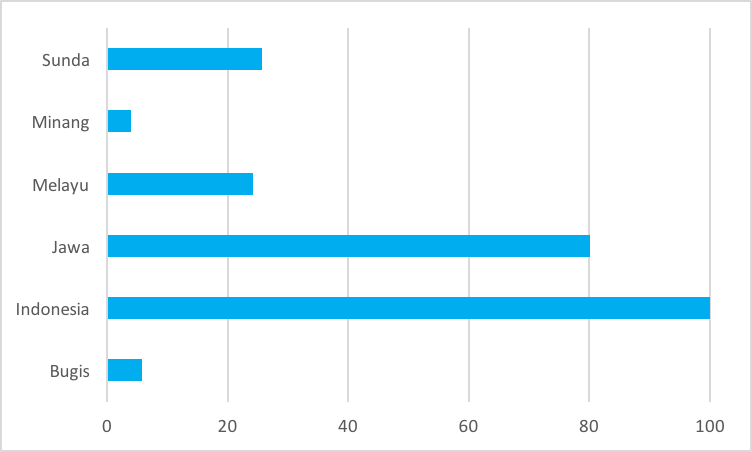 The 109,000 user contributions came in surges, which correlate well with the redeem periods, where players could exchange game points for phone credit. A recent user survey suggests that phone credit was a major incentive for players, among others. Based on the dictionary completion rates, highlighted in figure two, different incentives for gaming in less common languages may be needed in future phases.

What are the next steps?

Secondly, Pulse Lab Jakarta will be hosting a Research Dive in the upcoming weeks, involving  linguistic experts from research organisations and the data gathered from Translator Gator. The goal of the Research Dive is to produce a national open-source toolkit for Indonesian language processing. This, in turn, will inform a series of deeper linguistic studies, for instance, an investigation into Indonesian national and local languages and a study on linguistic communities among youth.

Pulse Lab Jakarta has received requests from across Southeast Asia for deploying Translator Gator, for example from UNDP in China and UNICEF in Viet Nam. The game holds tremendous potential in enabling computational social research and therefore will be open sourced once the user manual has been developed and completed.

This first, experimental phase of Translator Gator has been received with great enthusiasm by a varied and wide range of players. Now, we want to hear how we can best develop the game so that it can raise even more awareness around the SDGs. So tell us your ideas for the future of the initiative…

Pulse Lab Jakarta is grateful for the generous support of the Department of Foreign Affairs and Trade of the Government of Australia.