“For a long time now I have been concerned about the function of data… because we do not use the data we have. We only compile and collect data, we never analyse it” – Head of a Local Health Agency, Nusa Tenggara Barat province.

Under an extractive model of data collection and knowledge generation, information is harvested from the peripheries, stored in a central repository, and subsequently analysed for central decision-makers to act upon. The concept of a data empowered village works on an inverse assumption: the closer people are to an issue, the better they are positioned to understand and act on the data.

In the private sector, decentralised decision-making is something on which companies have been increasingly focused. For example, Nesta, a UK-based innovation agency, conducted research into how companies make decisions and grow their businesses. Among an array of insights, the authors found that the most sophisticated users of data have more decentralised organisational structures and that their employees are significantly freer to try new ideas (see Figure 1). In short, they concluded that decentralised, data-driven companies are more responsive and innovative.

If this is true for companies, what would such a system look like in the public sector? 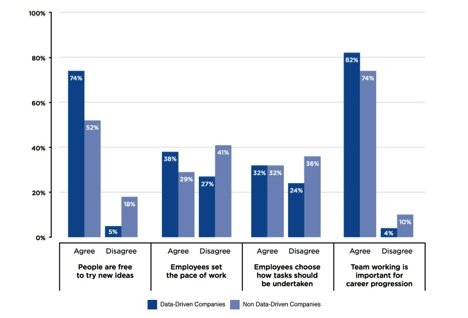 Figure 1: Decentralization and Data-Driven Decision Making ( percentage of employees who agree or disagree with the statement). Source: Nesta

The existing data-collection systems which accompany frontline services meet the needs of central government, especially policy-makers, but are often hard to use for frontline staff, such as with maternal health services on the island of Lombok, Indonesia, highlighted below.

In a data empowered village, citizens and frontline staff would have meaningful access to their data and would be able to conduct data analysis in situ, which would enable sensemaking of issues as they evolve.

The information system would continue to meet the needs of central government, but would not centralise agency over problems and solutions. Decision-making would be as close to the issue as possible. This approach, enabled through data analytics and visualization, would create tighter feedback loops, thus making public services more responsive.

Our previous work in Lombok highlights some of these opportunities. We observed that midwives are required to complete nine paper-based records for each service interaction, many of which have overlapping entries, resulting in large allocations of time to administration. These records feed archives and central administrations, and are currently of little use to the frontline staff for learning and service development. To streamline the process, we prototyped a digital system, with a single data entry interface that populated all the relevant databases. Even without the benefit of data analytics and local sensemaking, such an approach would free up valuable days each month currently allocated to administration.

Another interesting example is that of Nendali village, Papua Province, where we encountered a relatively sophisticated data collection system, but an absence of the technological, administrative and organisational capacities necessary to obtain optimum benefit from the data. As with the experience in Lombok, although the village information system provided data aggregation through the interface’s reporting functions, it did not include sensemaking of the data beyond these functions by residents, administrators and frontline staff. The ability of citizens to not only collect data, but to derive insights, act upon them, and see the impact of these actions is crucial to making an information system have real value.

“Many of our residents fail to receive the benefits they deserve because of outdated and inaccurate national data” – Head of a local primary school, Papua Province.

As highlighted by our work in Papua, technology is just one part of a larger system of knowledge production. Around more sophisticated and open technologies for data governance, there is a need to wrap efforts to enhance community data management, analysis and sensemaking.

A few examples we like that follow the same philosophy include Poverty Stoplight, PetaJakarta and the Lab Laboo Challenge awardees. Community ownership comes front and centre throughout.

In turn, as citizens, communities and local governments learn from their data and develop ideas for local service improvements, tools for analysing and influencing the broader system of governance will be required. But the first step is clear: data empowerment.