Phase 2 of Translator Gator Wraps Up

Phase 2 of Translator Gator language game, which UN Global Pulse developed to support disaster management and humanitarian efforts, closed on 31 July — exactly 100 days since it was launched. More than 3,500 people across Southeast Asia and Sri Lanka engaged with the game.

To support humanitarian and disaster management efforts, Pulse Lab Jakarta launched in April  Phase 2 of Translator Gator to use the “wisdom of the crowd” to create disaster-related keywords for languages spoken in ten ASEAN countries and in Sri Lanka.

The game aimed to create crowdsourced taxonomies for less known languages that can be used for computational social research initiatives, as well as to increase disaster awareness among tech-savvy youth.

People’s engagement with the game – Facts and figures

The game recorded 1.8 million activities across the four gaming components: Translation, Evaluation, Alternative Suggestions and Word/Phrase Classifications, and gathered 3,500 registered users from the 11 countries. Of the total number of players, 72 per cent were women and 28 per cent were men.

Using the wisdom of the crowd to develop disaster-related dictionaries

The game achieved a dictionary completion rate higher than 80 per cent for 10 out of 28 languages for which players provided translations. The ten languages are: Khmer, Indonesian, Javanese, Burmese (Zaw-Gyi font), Tagalog English, Filipino/Tagalog, Sinhala, Tamil, Sri Lanka English and Vietnamese.

Below is a breakdown of the top three countries in terms of numbers of players and of the list of countries with the highest and lowest participation rates: 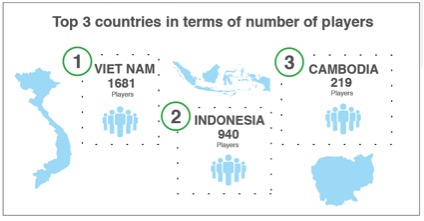 Figure 1: Top 3 countries in terms of number of players

Figure 2: List of countries with the highest and lowest participation rates

Who are the winners

To incentivize players, a variety of prizes were put into play for the highest game scores and best players. After analysing the scores from all participating countries and the validity of the answers provided by players and here is the list of winners.

Pulse Lab Jakarta would like to thank all players who helped create new language taxonomies. This work will be used in future data innovation projects and tools to inform disaster-management and emergency response to ensure that no one is left behind.