The International Organization for Migration (IOM) recently released a new report on migrant deaths and disappearances entitled: Fatal Journeys Volume 3 – Part I: Improving Data on Missing Migrants. The report features a chapter highlighting the work of UN Global Pulse and UNHCR to explore how big data and data analytics could be used to better understand migrant and refugee movement patterns in the Central Mediterranean.

The IOM has estimated that at least 22,500 migrants have died or gone missing around the world since 2014, a figure that almost certainly underestimates the true magnitude of lives lost. Among the migrant routes currently in use, the overseas routes across the Mediterranean are reportedly the most deadly. In the first half of 2017, for example, the Mediterranean accounted for over 70 % of recorded fatalities and disappearances worldwide.

UN Global Pulse worked with the UN refugee agency (UNHCR) on a project to define whether vessel location data – specifically Automatic Identification System (AIS) data and broadcast warnings- can provide additional insights into the movement of displaced populations from Libya to Italy and Malta.

In 2016, over 363,000 migrants arrived in Europe by sea through the Mediterranean. The project used AIS data from summer and fall 2016 to determine the route of rescue ships from Italy and Malta to rescue zones and back and combined it with broadcast warning data containing distress calls from ships stranded at sea. These data were used to construct narratives of individual rescues, but also to gain a broader understanding of rescue activities in the region. The project also explored the automated recognition of rescue activities using machine learning and artificial intelligence.

The analysis highlighted common patterns of rescue activity, such as sequences in which one vessel conducts multiple rescues over time until it reaches capacity, or in which multiple vessels collaborate on a single rescue. It also showed a change in the pattern of distress signals over time: signals were recorded closer and closer to the Libyan shore forcing rescue operations to venture and expand beyond initial search and rescue zones.

To help understand the magnitude of rescue operations and to provide easy access to the analysis, UN Global Pulse designed an interactive visualization, which can be publicly accessed at:http://rescuesignatures.unglobalpulse.net/mediterranean/. 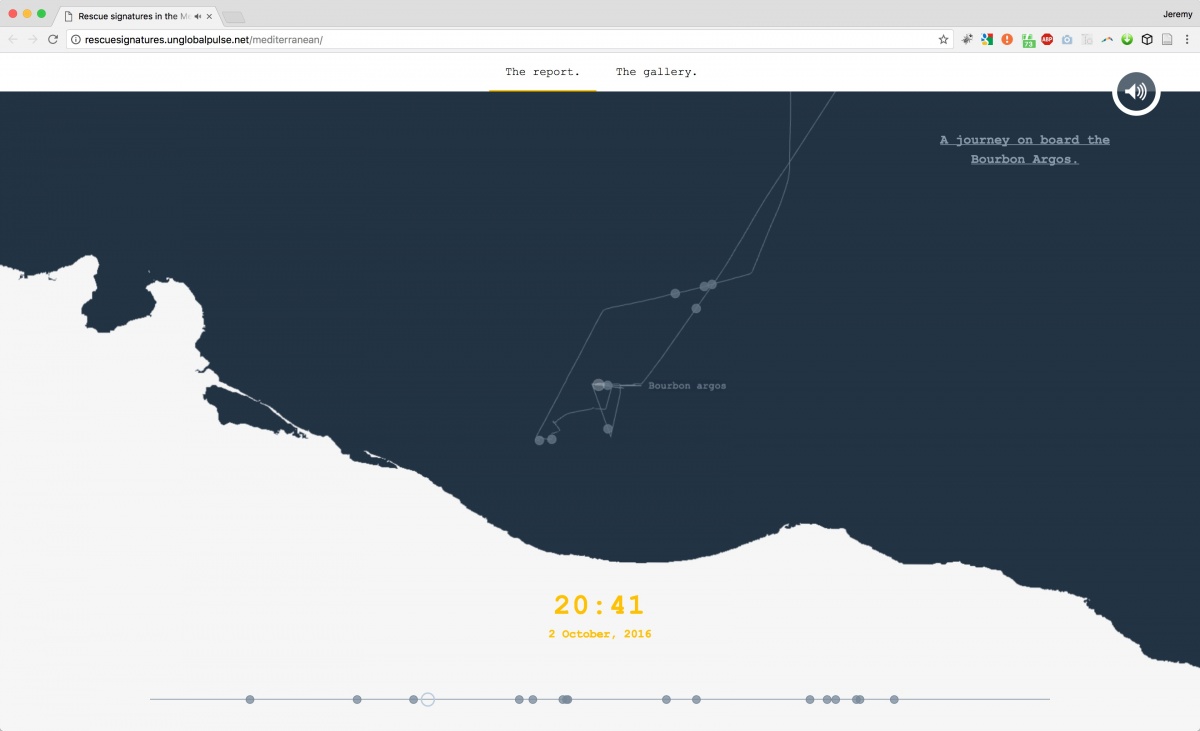 The visualization complements the methodologies and lessons learned described in the Fatal Journeys report and showcases how big data analytics can be parsed to better understand the migration patterns of refugees and migrants arriving in Europe by sea.

Insights from these data provide a timely, accurate and high-level view that could be used to optimize rescue operations in the Mediterranean. This research shows the magnitude of this humanitarian crisis from a new angle, promoting greater transparency and accountability.